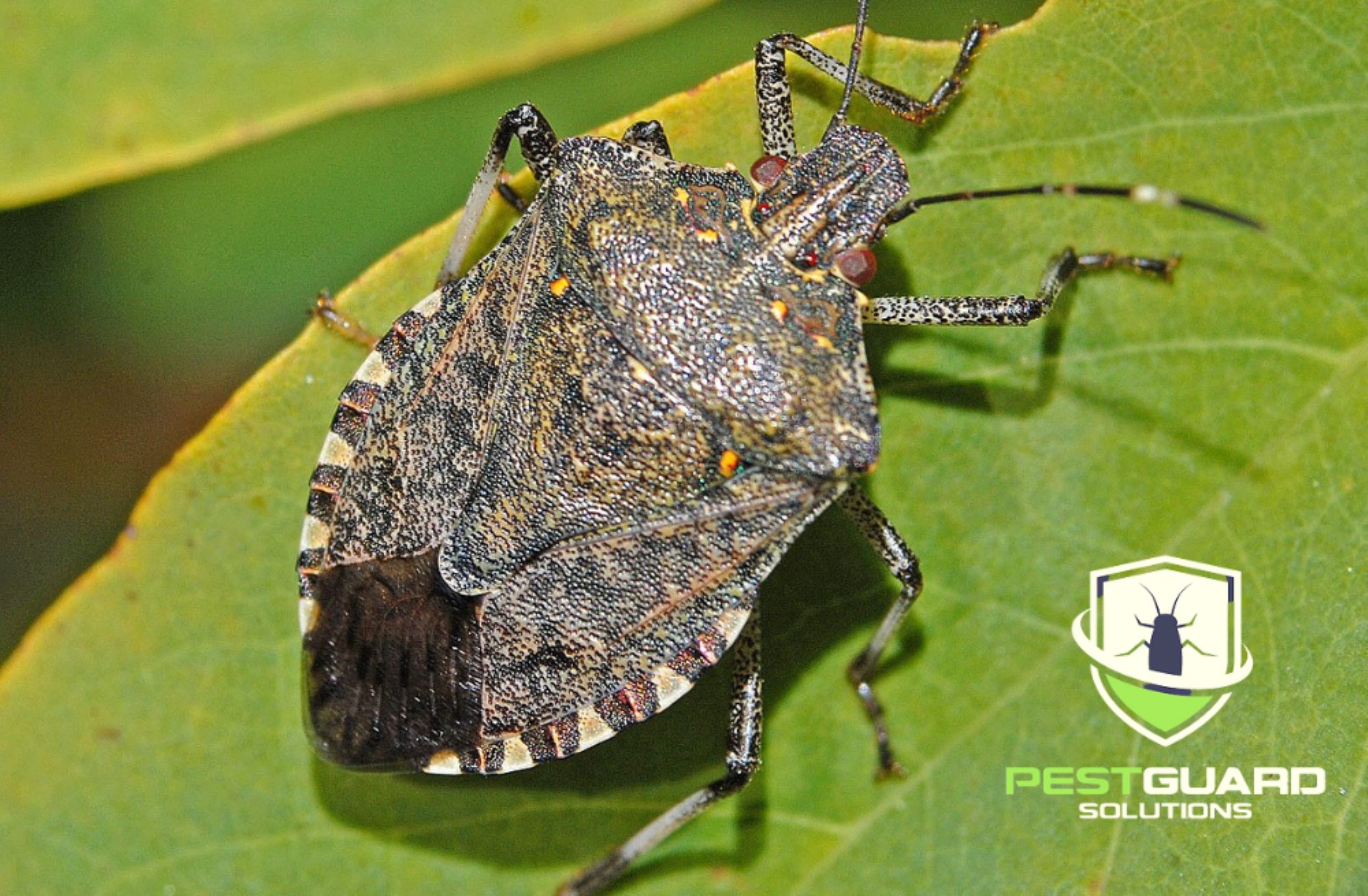 Coming over from Asia in the late 90’s, the Brown Marmorated Stink Bug made its entrance to North America. This season in South Carolina, we have seen more than ever before.

While they are not technically “dangerous” to humans, they are serious pests of fruit trees, corn, garden vegetables and some ornamental plants. The adults usually feed on fruit and the immatures (nymphs) tend to feed on leaves and stems as well as fruit. Heavy feeding on fruit will cause the fruit surface to become depressed, spongy, and often discolored. The good news is stink bugs don’t bite or sting people, and they don’t chew up wood or cause other damage to properties.

Once they make their way into your home through cracks, windows and door openings, the best way to get them up is with a vacuum and then empty the canister ASAP. Stink bugs emit a strong, foul odor when they are crushed, which can cause your home to smell. Removing these pests means doing so carefully, so that they won’t give off their distinctive odor.

One thing to keep in mind if you find them in your home, a small population of people are allergic to them. Individuals sensitive to the odors of cockroaches and lady bugs may be particularly affected by stink bugs. Additionally, if the insects are crushed or smashed against exposed skin, they can produce dermatitis at the point of contact.

We have had several calls about stink bugs this season and are happy to come to your home to eliminate these pests for you. Our team of technicians has the training and tools needed to carefully eliminate stink bugs from your property without leaving their unpleasant odor behind. Give us a call at 864-616-6308 to schedule your stink bug elimination!

Do I Need Pest Control During South Carolina Winters?

Most Common Ants Around Your Home in Upstate South Carolina

Benefits of a French Drain

"These guys are the best! They are kind and respectful to our property and their techs are always friendly. The product is great too! Where we are, pests are a big problem and PestGuard has given us a sense of ease of mind living in our home. And they respond immediately. I can't recommend them highly enough!"

"In addition to addressing our flea infestation, they came to the house to do our termite bond, a fire ant treatment, and had to come back a couple times to deal with the INSANE flea problems in our newly purchased home. I was hesitant to even contact them again when the fleas persisted after their 30-day guarantee time period because most people would charge again...but Tyler came back even after that period of time to deal with them until they were finally gone! I wouldn't hesitate to use this company again and would highly recommend."

"Very nice, friendly, professional and quick. The Price was WAY better than the 5 companies I called earlier that day and I spoke directly to someone, no extra or waits. Definitely going be my go to pest control place. Already recommending them to friends and family."

"I have used other local companies in the past and was never satisfied. PestGuard went above and beyond to take care of my home. They are respectful, trustworthy, and honest. Highly recommend."

"After recently buying our first home, we encountered some issues with a very, very wet crawl space. When we contacted our home inspector and Tyler, they both went way out of their way to help fix a problem that wasn't truly theirs. Tyler was prompt, friendly, and honest. He helped calm any fears I had about having a wet crawl space and got the problem solved. We will certainly be customers in the future!"

"Company was very professional and honest from the start. Tech was extremely helpful and thorough. Highly recommend to anyone that needs termite protection and warranty coverage."

"Tyler and team did a fantastic job addressing our crawlspace issues that included moisture remediation and dry rot too. They are experts in crawlspace ventilation with self controlling vents and fans. We use them for our termite bond and pest treatments on all our properties."

"This company was so pleasant and professional on the phone prior to the at appointment and explained all the options. He was prompt on arrival and once again explained everything he would cover. I highly recommend PestGuard Solutions."

"I had Tyler come out and perform termite prevention and pest control. All I can say is it was an absolutely wonderful experience. Tyler is very knowledgeable, courteous, friendly, and through. I wish I could give them more than 5 stars!"

"Tyler is very professional and very easy to work with!!! Loved doing business with him... He always looks out for the customers best interest."

"Mike the technician was really friendly an did a wonderful job!! Thank you all so much i can finally relax!!"

"Could not be more pleased with the service I received from Tyler this week. He sprayed the inside, outside, and even sprayed for mosquitoes. I am finally able to enjoy my backyard without being attacked! Outstanding customer service!"

"The gentleman was knowledgeable, respectable and efficient in the work. His prices were very reasonable. He treated the house and gave us a good quote on moisture control. I contracted him to do my termite control. Very satisfied!"

"They are big enough to take care of any problem I have. BUT! They are also just small enough to still care about the customer. I will use them again and highly recommend them to anyone and everyone I know."

"Great company,we had a deadline to get this work done, They made it happen for us. We really appreciated his help."

"PestGuard Solutions is phenomenal! Excellent service and very reasonably priced. I would definitely recommend them if you have any pest control or moisture problems."

"I would definitely recommend this company. Hard to find this much attention to detail. They were also prompt and courteous."

"Very trustworthy and an extremely hard worker! Tyler is very knowledgeable and thorough! You will not be disappointed!"

"After using PestGuard Solutions on a rental property of mine, I felt compelled to give him additional properties based on his knowledge, service and professionalism. He takes customer service seriously and it shows. All companies talk the talk, few can do the walk ! I would recommend PestGuard for all your extermination needs."

"Excellent service! Very friendly and professional! No more bugs in my home thanks to PestGuard! I highly recommend them!"

"Great prices! Arrived on time (for my termite treatment), very thorough, explained everything, job was completed in a timely manner. I would highly recommend this company!"

"PestGuard did a wonderful job. On time, showed great attention to detail and was very professional. Me wife and I had them out to handle our termite problem. Price was very fair and the work exceeded our expectations. They provided us a great guarantee as well. I would recommend them to anyone looking for a quality job at a affordable price. "

"Courteous, called to confirm appointment the day before. Was on time and prepared to do what we had agreed upon, Actually went above and beyond to make sure everything was to my satisfaction."